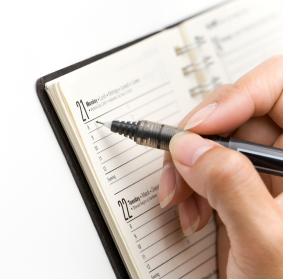 So, it’s that time of year again. The time that my list-making, goal-setting Type-A self absolutely loves. The New Year. And that inevitably brings resolutions.

Past resolutions have been hit and miss. I’ve resolved to work out more, to journal every day, to practice my instrument XX hours per day and spend XX hours making reeds, to clear out the clutter and put my crap away, you name it. I’ve resolved it. And for the most part, none of these well-meaning promises ever stick for very long.

Why? Well, honestly, I think it’s because once I start making a list I just can’t stop. A list of one or two really good resolutions usually turns into eight or ten. And for me, that’s just overwhelming. Especially if the resolutions are big ones that require lifestyle changes. I end up spreading my limited icing so thinly over a very large cake that I end up failing in style. Apparently this means I have an issue setting boundaries with myself.

Now, if I were a different kind of mom, things would be different. If I were the kind of SAHM who sits on the couch and eats bonbons – homemade, of course – every day, for example. Now, I’m not knocking all SAHM’s here. The majority of them that I know are hardworking genuinely caring souls who do the best for their families. But come on, be honest. As much as we deny it, we all know at least one of the other kind. The ones who bemoan the day they have to ‘clean up the house because the maid is coming.’ The ones who only got four hours last Tuesday to peruse Epicurious for Martha-Stewart-worthy dinner recipes because little Magnus or Starla had a dentist appointment. The ones who work so hard to fit in the mani-pedi between tennis and yoga. Those moms. My Spouse says I would last about a week before going stir crazy. You know what? Let me try it for a week and let you know if that’s true!! Because I guarantee that I’d have tons of brilliantly productive ideas that would actually see the light of day if that were me. And I’m not just talking about cleaning up for the maid. Things like:

The list goes on. You get the idea. Instead, you know what happens? I spend my few minutes of rare free time doing one of three things:

Number three is the most popular at my house. I could probably make a hobby of having meltdowns, now that I think about it. Yeah. Sure. That one would be seriously popular with the fam, wouldn’t it?? And to be honest I can’t stand myself when I’m having a meltdown either – so that one’s out.

So where does that leave me? Well, I’ll tell you. My boss actually gave me a Pinstrosity-worthy idea last week that I’m taking to heart.

The Resolution of the Month.

With the idea that it takes three weeks to change a habit plus the conviction that anyone can do something consitently for a month, I’m taking this one and running with it. I’m tackling my to-do list of resolutions one at a time, one month at a time. My biggest challenge here is to tell my overachieving conscience to shut up and deal. One change. One month at a time. I’m having to remember what my mom said about childbirth when I was pregnant – you don’t get extra points for doing it the hard way. So there it is. I’ll post tomorrow about my January resolution.

One problem – the one thing I really want to achieve is an unachievable goal. Could be an issue…

Deadlifts for a Dingbat

My Personal Journey to Fitness, or Maybe the Hospital

Being honest is the only way

Learning to live in choas and belssings

The Librarian Who Doesn't Say Shhh!

Adventures in looking and living well

musings of a citified chick

The latest news on WordPress.com and the WordPress community.